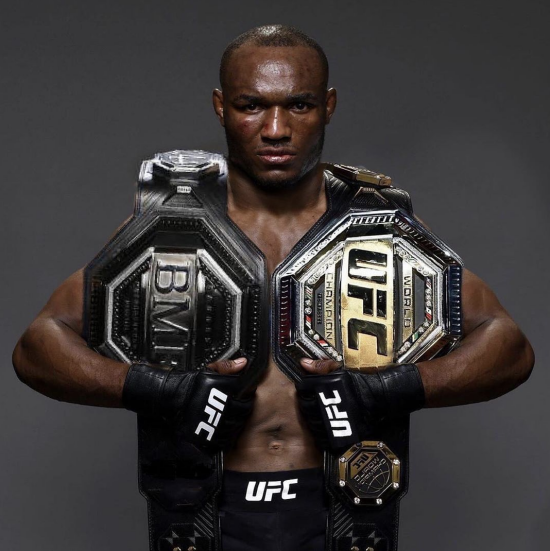 Known as the “Nigerian Nightmare”, Kamaru Usman has extended his UFC Welterweight Champion title by defeating his opponent, Jorge Masvidal in the just ended UFC 261 fight on Saturday night.

The UFC 261 fight was a rematch between the world champions following their match in 2020, of which Joge Masvidal lost in a unanimous five-rounds decision.

Jorge Masdival was once again defeated in the rematch during the second round of the game.

However, before determining the fate of the fighters in the second round, Jorge Masvidal, who is well known for holding the fastest knockout record in UFC history at 5 seconds and never been defeated in his fifty-four times professional fights was full of smiles after managing to swerve some punches from the defending champion, Kamaru Usman.

Unfortunately, in some few seconds into the round, Kamaru Usman overtook him with spectacular right hand punches to his jawbone and rendered him incapacitated.

The win by the Nigerian Nightmare has increased his championship in fourteen fights. It is also marks the first-time Jorge Masvidal has been defeated in 54 fights.

Addressing the media after the win, the UFC welterweight champion delightfully indicated that, he has always wanted to reach to the top of his game because the sky is the limit and wining the match is a blessing and also shows how he’s well developed in mixed martial arts.

Therefore, he’s going to work more and get ahead of the other sportsmen and win his fights.

Jorge Masvidal on the other hand admitted his defeat and congratulated Kamaru Usman for the clean win. He also revealed that, he underestimated Kamaru’s power and was so full of himself but Kamaru exhibited great skills he least expected.

Nicknamed “the Nigerian Nightmare” under the blessing of former Nigerian-American footballer Christian Okoye, Usman dominated his opponent UFC champion, Tyron Woodley in 2019 for the ground-breaking record as the first African-born fighter to become the new UFC champion.

Born on May 11, 1987 in Nigeria, Usman grew up in Nigeria and then moved to Texas at age seven when his parent migrated to the US. He began fighting in high school when he developed interest in wrestling.