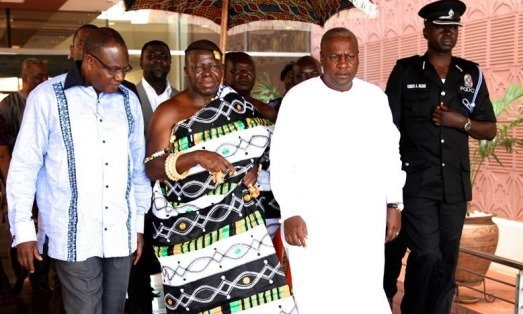 After a video of  President John Mahama and the Asantehene, Otumfuo Osei Tutu dancing went viral, it has ben reported that Some security personnel at the Manhyia Palace in the Ashanti region have been sacked.

The Chronicle,reports that the dismissed security personnel have been replaced.

Reports indicate that security at the Palace has also been intensified with the introduction of strict criteria to regulate individuals who have access to the inner chamber.

The video  below of a royal party held at the Palace showed Otumfuo and President Mahama dancing heartily to the popular ‘Yentie Obiaa’ song by Daddy Lumba…. For full story click here.

Qatar Airways to start daily flights to Ghana next month 2015

Pope Francis lauds Ghana as a success story for Africa