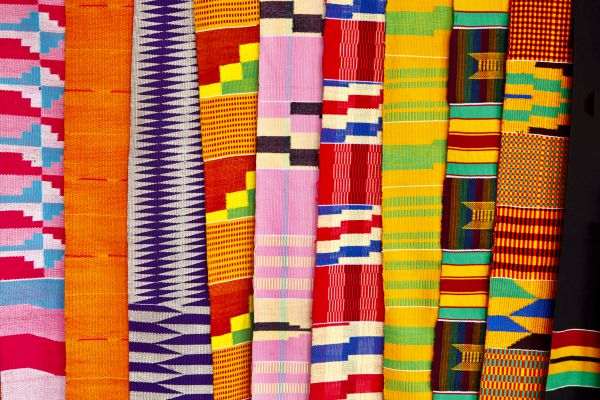 The Kente fabric is Africa’s most complex making cloth with varieties of meanings pertaining to the African culture and tradition.

Various historical accounts suggest that kente was originated from the Ewe tribe in Ghana and was passed on to the natives of the Ashanti region of Ghana. The Ewes named the cloth “ke” “te” which is now mispronounced as “kente’.

According to the Ewe dialect, “ke” simply means to spread or open and “te” is to tighten or press. Therefore, in referring to the process of making the kente cloth, the Ewes said, “ke na te” thus “spread and tighten”.

In that case, you open (“ke”) the weft, pass the waft through it, and press (“te”) as many times until a desired pattern is obtained.

The Ashantis on the other hand adopted the process and in the Akan dialect referring to a woven cloth is “nwentoma” however, the name adopted was “Kente” which means basket and a traditional Ghanaian basket is also weaved in a particular parttern.

The cloth is hand-woven in different colours intertwined on a thin straight loom by the Kente weavers.

Decades ago, kente cloth was associated with only the royal people because it was only worn by the kings and queens on several occasions to suit the purpose of the occasion. It’s mostly worn for ceremonies like weddings, christenings, graduation, parties, funerals as well as other social functions. Political and traditional leaders in Ghana, Africa and the world are often seen in the Kente fabric to portray the pride of the African heritage.

As the world evolves with culture dynamism and assimilation, the African culture has been accepted internationally with a lot of changes in the styles of dressing especially the Kente cloth which is currently worn across the globe.

Ghana made Kente cloth used to be solely woven with the tread made from silk but in recent years it’s made from rayon, cotton and silk making it affordable and accessible to everyone since it’s famously worn by people across the globe.

Today, Kente is made into fashionable costumes such as hats, mufflers, ties, shoes, bags, sandals, shirts among other fashionable pieces for commercial sales.

Every colour and pattern of the woven kente cloth has a peculiar meaning and conveys certain messages to the society. The dynamism on African sense of fashion in our contemporary world has seen a lot of effort from African designers to exhibit their innovative skills through the various patterns of which kente cloth is woven.

To this effect, new patterns and types with new meanings are emerging alongside the original designs.  The various messages over 350 kente patterns denotes includes;

There are about 15 colours that runs through the Ghanaian kente cloth. Most commonly used are red, yellow, green and black which traditionally represents, (red -the blood of forefathers, yellow- gold, and green -the richness of the land). The other colours include blue, grey, white, maroon, silver, purple, gold and pink. A number of types are made in the Ghanaian markets and below are some of the types.

Types and literal meanings of kente are;

Wofro Dua Pa A Na Yepia Wo   – “One who climbs a tree worth climbing gets the deserved help.”