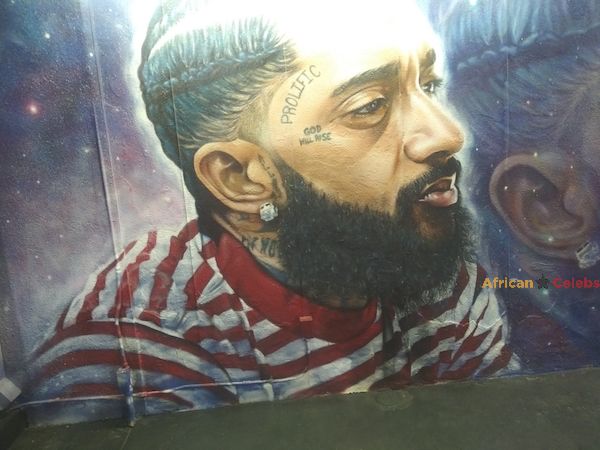 The World Mourns Nipsey Hussle: Rapper, Father, entrepreneur, brother and community activist Nipsey Hussle’ memorial service today is expected to draw over 20,000 at the Staples Center, with thousands more paying their respects during a 25-mile procession.
He met his untimely death on March 31st, 2019  when he was shot in the head and torso in front on his The Marathon Clothing store in Slauson Ave. , Los Angeles.
Thousands of fans are joining Nipsey Hussle’s family to honor the late rapper Celebrating His Life  at Staples Center in downtown Los Angeles. The celebration starts 10 PT…
The Crenshaw community have also gathered to honour a legend. The Marathon Clothing store, will be the last stop before Nipsey is taken to the memorial home.
Stevie Wonder, Snoop Dogg, Anthony Hamilton Marsha Ambrosius set to Perform at Nipsey Hussle Memorial
What a sad sad sad day! RIP Nipsey Hussle

The vigil for Nipsey Hussle outside his store in L.A. keeps growing. The funeral procession will pass by here later today. #NipseyHussleForever 🏁💙pic.twitter.com/AqYqr9mzeq

More than 20,000 fans are expected at #NipseyHussle's Celebration of Life in Los Angeles today to honor the late music icon one more time. #NipseyHussleMemorial https://t.co/NrKodRb7JF pic.twitter.com/pQaUvxxFHO

People are packing out the parking lot of Nipsey Hussle's Marathon store as the memorial service continues ⬇️ pic.twitter.com/TgfuJ7z1rS