The award was in recognition of Dr Akwetey’s role in helping to persuade the leaders of the major political parties and other stakeholders to initiate a dialogue. In addition, the US Embassy said: “Dr. Akwetey has also committed himself to decentralisation, reforms and battling corruption within the government.”

Dr. Akwetey’s work has had a significant impact on Ghana’s elections and governance agenda. His efforts included promoting voter education, building sustaining credible electoral systems, ensuring peaceful elections, and building a climate of peaceful election adjudication. In 2012 and 2013, he played a key role in Ghana’s pre- and post-election environment, when he helped persuade the leaders of the major political parties and other stakeholders to initiate a dialogue. 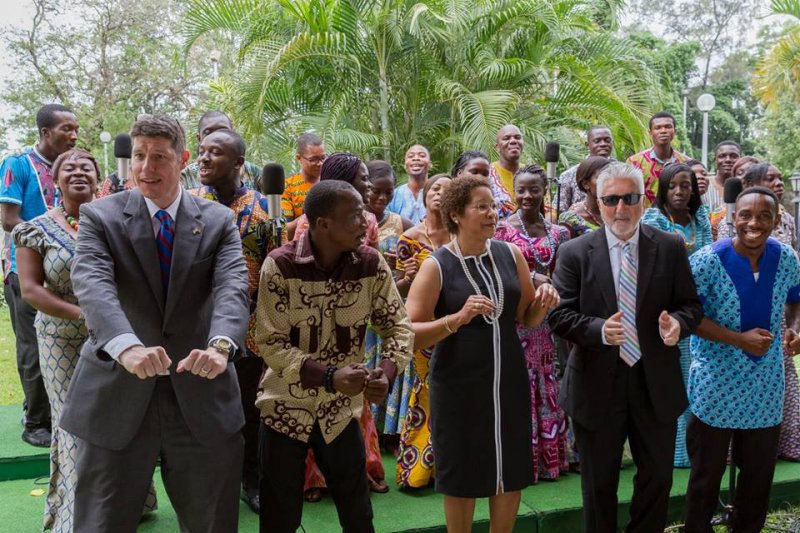 The results were impressive: at the IDEG-organised Kumasi High-Level Forum and at an Accra Peace Summit, presidential contestants committed themselves to protecting the peace in the country, condemning political violence and impunity.In addition, Dr. Akwetey has committed himself to battling corruption within the government. While meeting with political and media leaders, he has repeatedly called for the strengthening of anti-corruption agencies. Looking ahead to the 2016 elections, he has emphasised the essential role that the nation’s leaders play in maintaining the stability of Ghana. At a workshop this past November, Dr. Akwetey stated that “democracy is a serious business which requires discipline, sacrifices and neutrality.”As he promotes those values in Ghanaian leadership, Dr. Akwetey himself leads the Multi-Party Governance Forum to promote broad and inclusive participation in the constitutional amendment process, especially in regards to the decentralisation of government power.Decentralised power—what we call “federalism” in the U.S. —with the national government sharing local authority at the regional level, has worked well in the United States for over 200 years. We have seen it foster local responsibility. It helps us breed new generations of leaders tested on a smaller scale before they take on national leadership roles. It uncovers leaders on the municipal, state or regional level who are directly connected to the local citizens who choose them, increasing citizen identification with and trust of local government.Dr. Akwetey’s work is commendable, and essential. I dare say that if he were alive today, Martin Luther King, Jr. would again be inspired by the work of our honoree.Dr. King once said, “An individual has not started living until he can rise above the narrow confines of his individualistic concerns to the broader concerns of all humanity.” This sentiment rings true for Dr. Akwetey’s involvement in Ghana’s political environment. Because of his contributions to Ghana’s peace and stability and his leadership in encouraging improved community and social justice, Dr. Emmanuel Akwetey is presented with this year’s Martin Luther King, Jr. Award.It is now my honor to call Dr. Emmanuel O. Akwetey to join me and receive the 2015 Martin Luther King, Jr. Award for Peace and Social Justice. Read more here