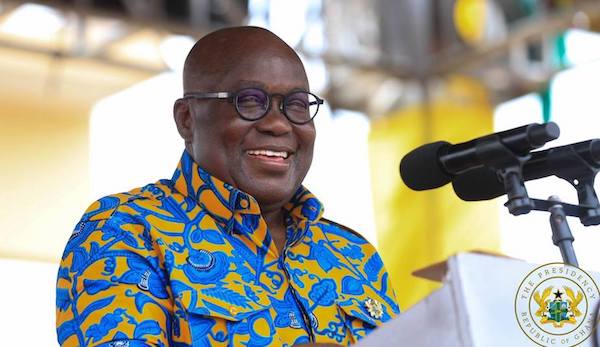 ”We live on the richest continent in the world yet our people are the poorest, that’s a contraction that has be resolved’  Akufo-Addo

On Thursday,  October 25th 2018, Ghana’s President Nana Akufo-Addo was the Guest of Honour at the Tony Elumelu Foundation Entrepreneurship Forum held in in Lagos, Nigeria.

During his keynote address, President Akufo-Addo informed the young African entrepreneurs (5,000 entrepreneurs across Africa)who are trained, mentored and funded, by the Tony Elumelu Foundation that

”We live on the richest continent in the world, yet our people are the poorest, that’s a contradiction that has be resolved….strong market economies provides the best framework for developments, for prosperity and for wealth creation”

President Akufo-Addo, further advised that, leaders must run their country and the economy well

When asked by one of the young entrepreneurs if the $60 billion given to Africa by China is not a betrayal of the Africa Beyond aid, President Akufo-Addo said

”Up till today, the education budget in Ghana  30% is funded by grants from foreign donors, the same with the health budget of Ghana…..Borrowing money is not aid. What President Xi Jinping offered is a $60 billion fund which African countries can access, not as aid but as loans. If you can produce a project that the Chinese think is worth supporting, you can have access to that money, but you have to pay it back.”

He added that “everybody borrows money. United States of America is one of the biggest debtors in the world. So borrowing money is not necessarily a betrayal of the concept of independence NO. The key for us in borrowing money is that we borrow money to create assets that will allow us to pay the money back…

President Akufo-Addo, further explained that the money must be used wisely to create assets that will allow Africans to pay back. ‘Our aim and focus should be on expanding Africa’s economy and Infrastructure…’

Speaking at the opening of a major summit with African leaders in September, China’s President  Xi pledged $60 billion to Africa in the form of assistance, investment and loans with ‘no strings attached’ China’s Xi made it clear that the money was to be spent wisely and not anyhow

”Chinese funds are not to be spent on any vanity projects”.

he believes inadequate infrastructure is  the biggest bottleneck to Africa’s development. President Xi  added that he will encourage other companies to invest also minimum of  $10 billion in Africa over the next 3 years. Some of the people we spoke to were a bit confused about the ‘no strings attached’ aspect. It is therefore very good that the question of the $60 billion from China to Africa was explained Ghana’s president.

President Akufo-Addo concluded by saying that there’s no contradiction to what China did with regards to the ‘Africa Beyond aid’ vision i.e standing on our own 2 feet…

Find out more about The Tony Elumelu Foundation Entrepreneurship by visiting  tonyelumelufoundation.org