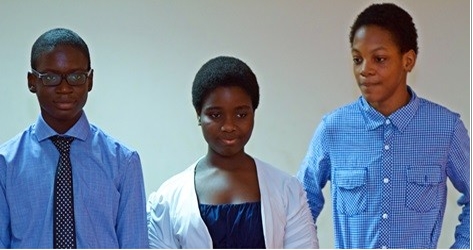 After an exciting national final at the Ghana International School, a twelve-year-old Denzel Segbefia from the North Ridge Lyceum emerged as winner of the 2014 MISE- Ghana Junior Math Olympiad competition.

Denzel Segbefia put out an exceptional performance to become the first choice candidate to represent Ghana at the International Junior Math Olympiad in Disneyland, Hong Kong -China next year.

He would be joined by Carolyn Asante-Dartey of Alsyd Academy and Nii Aryee Aryeetey of Merton International Schools as the first and second runners up respectively.

The 2014 Junior Math Olympiad program is a project of the MISE Foundation and was generously funded by the B5 Plus Steel Company and supported by the Lincoln Community School and the Ghana International School.

The funding from the B5-Plus Company also provided a cost-free program to participants from public schools across the country, removing any financial and logistical barriers and rewarding their extraordinary talents.

The 2014 event attracted over 700 contestants from across the country. The 2014 MISE-Ghana Junior Math Olympiad was conducted in collaboration with the Stanford Education program for Gifted Youth and the International Math Association KSF and was coordinated in Ghana by the MISE Foundation.

After the first round competition on 24th March, 130 top scoring students made it to the semi-final round in April.

The top 30 high scorers on the semi-final exam were named finalists and were invited to participate in the 2014 MISE-Ghana Junior Math Olympiad finals at the Ghana International School.

It is an excellent opportunity for aspiring young mathematicians to develop their problem solving skills, get tournament experience, bond and connect with friends and others from different schools.

Mr. Joel Dogoe, founder of the MISE Foundation, pointed out that the competition would not have been possible without substantial financial support from corporate Ghana.

“The steel company from Tema, B5 Plus, stepped up to the plate and saved the day for the MISE Math Olympiad competition. Without their involvement the competition would have been at risk,” he said.

“Mathematics and Science are the two subjects that form the basis of preparing our youth to enter into further education in the fields of science and technology.

Unfortunately our educational system and indeed that of many other African countries pays far too little attention to these subjects and this will lead to a situation where Africa will have to rely more and more on the use of scientists, engineers and doctors from abroad.”

Mr. Mukesh Takwani, CEO and Chairman of B5 Plus and founder of the Delhi Public School (DPS) in Tema, announced his personal support and that of the company for initiatives such as MISE because they realise the importance of mathematics and science in the development framework of any country.

Well done to you all!