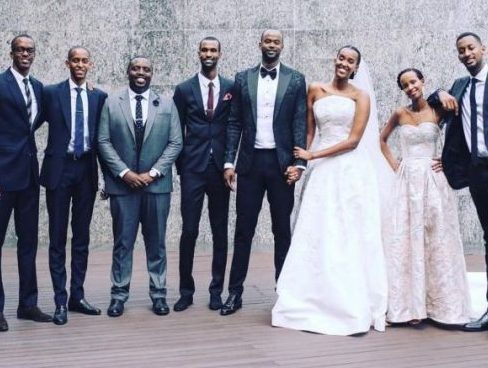 Ange Ingabire Kagame (25), the only daughter of the President of Rwanda Paul Kagame, is one of the most influential young women in her country and Africa.

That’s why; all eyes were on her wedding that was held last Saturday. Kagame married to the Rwandan architect Bertrand Ndengeyingoma (26) in a private wedding ceremony in Kigali.

The wedding was held at Kigali Convention Centre and Raddison Blu Hotel in Kigali. The guest list consisted of family members and close friends.

Photos from the wedding have recently been published and are trending on social media at the moment.

The bride and the groom have many pictures while walking down the aisle. They were accompanied by Paul Kagame and his wife, who were both proud and emotional.

Ange initially introduced Ndengeyingoma to her family in 2017 December. In 2018, a traditional religious wedding ceremony, Gusaba  was organized for the couple.

The very exclusive ceremony took place in the President’s home in a remote location in Ntebe.

Rumors were claiming that Paul Kagame initially did not approve the relationship and even refused to set an official wedding date; however, these claims were never proven right.

Ange Kagame, who has a smile from ear to ear in the wedding pictures, tweeted shortly after the wedding:

“I have found the one whom my soul loves- Songs of Solomon 3:4”.

Judging from their academic and professional lives, it is safe to say that they are intellectually a perfect match.

Born in Brussels/ Belgium in September 1993, Ange Kagame spent her childhood in Europe and the US to complete her education at top schools.

“I have found the one whom my soul loves”– Songs of Solomon 3:4💍❤️ 📸: @chris_schwagga pic.twitter.com/IEoyc42uMq

she completed her undergraduate degree at Smith College – a private liberal arts college where the undergraduate programs are only open to women.

In addition, she studied Political Science and African Studies. For her master’s degree, she studied International Affairs at Columbia University.

Ever since her graduation, she has been organizing campaigns across Africa to provide solutions for poverty and illness while also raising awareness for women’s empowerment and the importance of education.

African Celebrities Who Give Back

In 2015, she organized visits to textile factories in Rwanda to meet the female manufacturers and inform them about their rights at the workplace as well as future career plans.

In 2014, Ange Kagame made a public appearance at the White House with her father.

They were the guests of former President Barack Obama, who was hosting the United States – Africa Leaders Summit to discuss issues related to investment and security in Africa.

Bertrand Ndengeyingoma is just as qualified as his new wife. His passion for architecture started at the Belgian School of Kigali, where he attended for thirteen years.

After that, he completed his bachelors and master’s degrees at Massachusetts Institute of Technology (MIT) in architecture.

He is currently doing his Ph.D. at the London School of Economics while simultaneously working with the Bank of Rwanda.

We wish the happy couple an a HUGE Congratulations🎊🎊. The most beautiful Tallest couple in Africa