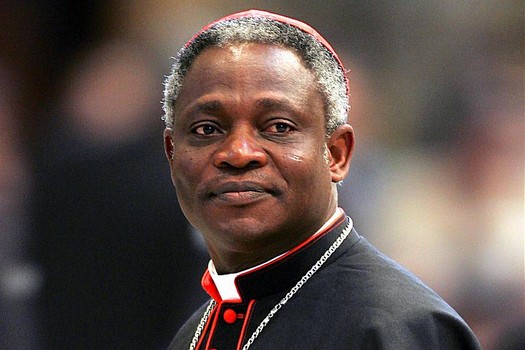 Ghana’s Cardinal Peter Turkson made the news in 2013 as one of the possible replacements for Pope Benedict XVI.  From humble origins — a mining town in western Ghana.  Born in the village of Nsuta-Wassaw in western Ghana in 1948, he was christened Peter Kodwo Appiah Turkson and brought up speaking Fante, one of seven languages he went on to master. His roots were humble, his mother selling vegetables in the local market while his father – with symbolism as obvious as the boy’s given name – was a carpenter.

His prospects were transformed by his schooling at St Teresa’s Seminary in the village of Amisano, which describes itself as “the cradle and nerve centre of priestly formation in Ghana… forming future shepherds after the Lord’s own heart”.

Peter Turkson advanced through African seminaries to a two-year stint at New York’s St. Anthony-on-Hudson, where he earned his Masters in Theology in 1975. He was ordained in the Catholic church by Archbishop John Amissah on 20 July of 1975, and the next year he was off to Rome to study scripture at the Pontifical Biblical Institute. That’s where he earned his doctorate (1992), and that’s where he found his way to being up-and-comer in the Vatican. Pope John Paul II made Turkson the Archbishop of Ghana’s Cape Coast in 1992, he was elevated to Cardinal in 2003, the next year he was Cardinal-Priest of San Liborio. With the elevation of Benedict XVI to the papacy in 2005, Turkson’s star became even brighter. He was appointed by Pope Benedict in 2009 to be the president of the Pontifical Council for Justice and Peace, a post he held until Febuary of 2013. Like Pope Benedict XVI, Cardinal Turkson is considered a church conservative; his speeches and writings over the years make it clear Turkson has no plans to reverse long-held rules just because they are deemed unpopular. Known as a Vatican insider, Turkson’s position as a church leader from Africa propelled him to front-runner status when it came to replacing Pope Benedict.

Cardinal Turkson has said that “if God would wish to see a black man also as pope, thanks be to God”. The Catholic Church chronicler Rocco Palmo called Turkson the lone Scripture scholar in the Pope’s “Senate” and believes that his status as a potential “papabile” has been elevated due to his appointment as spokesman for Second Synod for Africa in 2009.  With the resignation of Pope Benedict XVI in 2013,