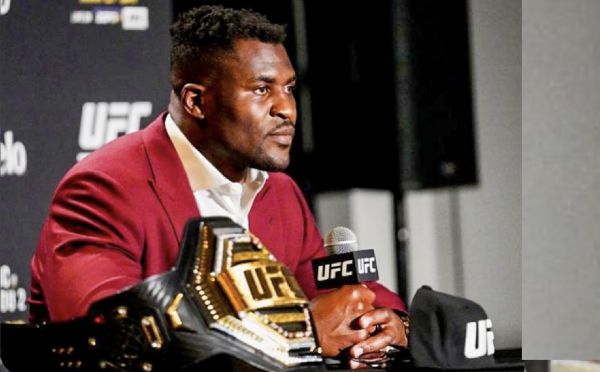 Reigning UFC heavyweight champion, Francis Ngannou has being honoured for his Humanitarian Awards.

Held on Monday, July 12, 2021 in the United States of America’s capital, New York, the award scheme which seeks to honour and celebrate the incredible impact of athletes, teams and professionals from the sport industry on their various societies through sporting activates, embarked on its seventh season of the celebration event.

Francis Ngannou, the only African to have been honoured alongside the other awardees for his zeal to make changes in the lives of young ones striving to achieve their aim in sports.

The heavyweight champion was awarded the Stuart Scott ENSPIRE Award which is offered to individuals helping the less privileged through sports.

Looking at the awards aim and Ngannou’s current project in Cameroon, it is not surprising that Francis Ngannou has been honoured under such award category.

The Francis Ngannou foundation as part of the winners will receive its portion of ESPN $1 million grants channelled into to the charities of the nominees and winners.

Francis Ngannou’s Charity Organisation in his hometown in Cameroon helps in uplifting the dreams and aspirations of children through coaching in order for them to explore their various talents and take action that will make way for positive change in their lives.

According to the MMA legend, his gym which is currently in operation under the Francis Ngannou Foundation is now full of quality training accoutrements which will make it easy for the children to access it to develop themselves through the gradual training process.

The Francis Ngannou Foundation gym has registered more than 100 children and still counting.

From zero support to success and honours, Francis Ngannou has been using his personal life experience to inspire people particularly, the young and disadvantaged who are struggling to make their way through in life.

Following the back-to-back positive energy and recognition, the reigning UFC Heavyweight Champion admonished the young ones not to give up on their dreams because they have nothing or no support system. Adding that it’s okay to start with nothing but with perseverance, they’d get somewhere.

However, when the lucrative aspect surfaces, that’s when you realise you’ve got a lot of things to buy but that is not the ultimate aim, the aim is to be pushing more to do great things and that is to finish the dream you started.

He then expressed his joy of influencing the lives on young ones in Cameroon.

He stated: “A lot of children now in Cameroon, because of me, they have a dream. They say, ‘I will be a champion in MMA. I will do boxing like Francis….”

Congratulations to Francis Ngannou on receiving this prestigious honour.