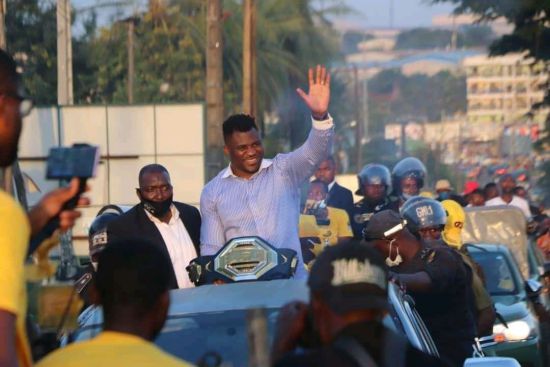 Cameroonian/French mixed martial artist, Francis Ngannou who is the reigning UCF heavyweight champion has embraced euphoric atmosphere upon his visit to his homeland, Cameroon.

The street of Yaoundé, the capital city of Cameroon was full of natives cheering and happily hailing the champion for his prestigious achievement, as displayed in the broadcast video, they all sought to have a feel of Francis Ngannou.

Some wanted to touch his belt, outfit and the body in celebrating his victory. It was such a very nice gesture from the country people in welcoming him back home after his historic win.

Meeting the press and the state officials, he genuinely expressed his gratitude to the fans and the country at large for supporting and encouraging him throughout his journey as a sportsman.

Subsequently, he asserted that, the huge morale is what keeps him motivated to develop his skills which contributed greatly to his success today.

“I would like to thank you from the bottom of my heart for the support you have given me, it is what has kept me going. Three years ago, I failed my mission and I promised to bring this belt home to you.

And it is thanks to the daily encouragement I receive from you. You are my strength, my motivation, it is thanks to you that I was able to accomplish my mission” ~ Yaoundé

As an African who grew up from a less privileged background, Francis Ngannou has really made the best out of his life despite his background and serves as a great inspiration not only to Africa but to the whole world.

Francis Ngannou has given hope and encouragement to anyone who wants to give up that is worth trying and not to give up matter what.

He’s a sign poster for Hope, believe, focus, persistent  and  not taking one’s eyes off the target set ahead not matter how many years it take