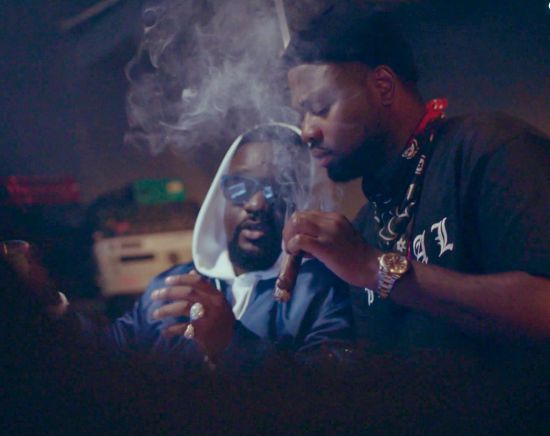 Sarkodie has released a high-grade tune as part of his birthday celebration. The 2 minutes, 44 seconds’ music video which was released on the rappers YouTube channel on his birthday eve features American rapper E-40.

In less than 24 hrs the music video was premiered yesterday, it received over 180k views!

CEO Flow, Sarkodie described himself as the Greatest of all time (G.O.A.T) and telling the world that despite all the sabotage he’s been facing, he is still the best of all in the music industry.

He also revealed that he has been relevant in the music industry for over 17years as a result he continues to be the only artiste with a huge and growing fan base because he’s the boss rapper.

Another verse in the video talks about how he has been able to achieved a lot financially and the numerous awards he has won from his rap music.

Having E-40 on the tune, the legendary American songwriter, rapper and actor climaxed the music with a top-notch verse. The visuals have sparked various reactions from hip hop music lovers and fans all over.

E-40 has been in the entertainment industry since 1986. He’s well-known for the formulation of a hip hop group known as The Click and his record label, Sick with It in the United States.

The ace rapper has worked on a lot of projects and has over twenty-five studio-recording albums in his possession for about 34years into the industry.

Moreover, E-40 has worked with other American great rappers including the members of his rap group on a number of projects such as Down and Dirty, Money and Muscle, Game Related, Connected and Respected etc.

He has also played an incredible role in the American movie industry. As an actor, he has starred in movies like, The Breaks, Hair Show, Obstacles, Malibooty, 3 Strikes and a lot more.