The water facility is one of many other social intervention programs undertaken by the Asamoah Gyan Foundation in Ghana.

The project estimated to cost over $50,000 was commissioned on Saturday by the Municipal Chief Executive of Wenchi Alhaji Hakibu Dauda and the Queen Mother Nana Ntoa Semendua.

Wenchi township to enjoy regular flow of water
The new water house pump project is meant to eliminate the current water-rationing system in Wenchi and its environs.

The facility, originally constructed in the Busia era as one of two main water pumps serving the people of Wenchi had collapsed for over a decade.

The Asamoah Gyan Foundation on the express request of President Asamoah Gyan took over the complete reconstruction of the facility which was commissioned on Saturday.

The Black Stars captain came in for massive praise as he was described as a ‘true statesman’ for his direct strategic social interventions to alleviate the plight of several deprived communities.

“Asamoah Gyan has shown true statesmanship through the construction of this water project to serve the people of Wenchi, even more so that it is one of many other projects being undertaken by the foundation,” MCE of Wenchi Alhaji Hakibu Dauda said at the ceremony to commission the project.

“He is a good example of who a true citizen of the land should be and we must all come together and support his worthy venture.”

The full view of the Water Pump House Project
The MCE joined by the Wenchi Queen Mother and officials of the Municipality cut the sod to signal the commissioning of the water project amidst a huge cheer of its indigenes accompanied by a 10-minute downpour – widely interpreted as ‘showers of blessings’.

Wenchi Queen Mother Nana Ntoa Semendua also chipped in her praise for the Al Ain ace for giving life to her people with the construction of the water facility.

Asamoah Gyan’s father, George Gyan Baffour revealed at the durbar to commission the project the inspiration behind the construction of the Pump House facility.

“My son Asamoah Gyan was here over ten years ago when he saw people – especially women and children trekking a long distance carrying buckets and gallons in search of water,” he recalled.

“I am very proud of Asamoah Gyan and his team for this vital intervention for our community,” she said. 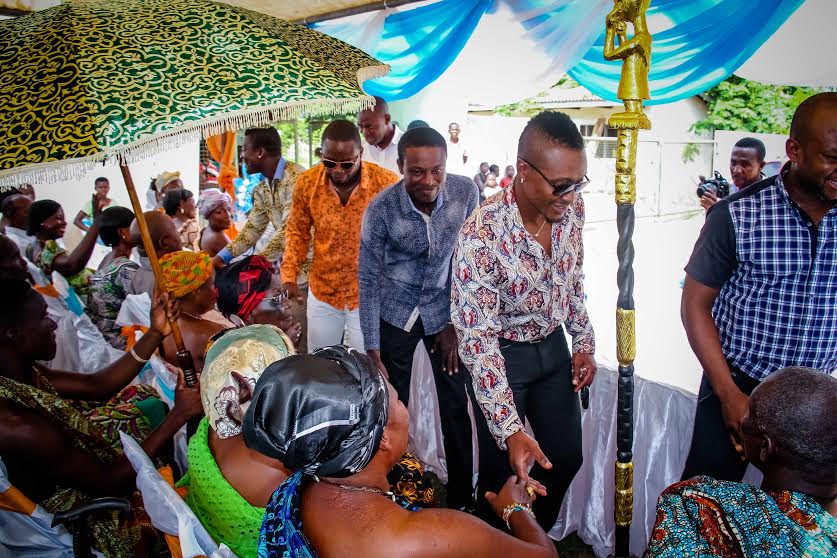 “It is a life saver because we all know that water is life.

“Water has been a major problem for this area – a burden which will be mightily eased with the commissioning of this project.

“Asamoah Gyan has always been a trail blazer throughout his life and career as a footballer and has set a new standard with the construction of this project.

“I can only ask for God’s blessings for him and urge others to emulate this example.”

Presentation made to the people of Wenchi
Asamoah Gyan’s father, George Gyan Baffour revealed at the durbar to commission the project the inspiration behind the construction of the Pump House facility.

“My son Asamoah Gyan was here over ten years ago when he saw people – especially women and children trekking a long distance carrying buckets and gallons in search of water,” he recalled.

“He [Asamoah Gyan] asked me the reason why and I told him the community had problems with its water pumps and thus not all areas have water flowing through their taps despite the vast water resource here.

“He then told me that one day he will get this town a water pump and over ten years on we see this facility as the fulfilment to his pledge.”

The People of Wenchi in a joyous mood
Chief Executive Officer of the Asamoah Gyan Foundation, Samuel Anim Addo urged the committee to take good care of the new facility so it last long enough for them to reap maximum dividends.

“This is your property and therefore take very good care of it so that its benefit will reach generations upon generations,” he said.

“Water is one of the thematic areas of our foundation and we are happy to be doing this for the people of Wenchi.

“Asamoah Gyan is blessed and he wants to ensure that his blessings are extended to as many people as possible.”

More AfricanCelebs who give back