As part of the introduction of the streaming and virtual reality platform to the people of East Africa, the Bongo Flava artist organised and hosted a press conference at the White Sands hotel in Dar es Salaam, Tanzania. 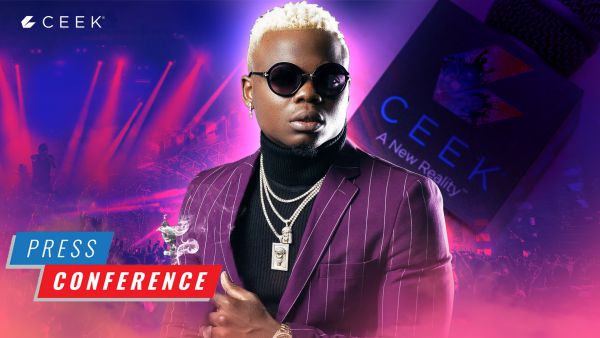 Harmonize and his crew sought to explain to East Africans the positive impact of the Ceek streaming platform and its contribution to the world of technological advancement. Additionally he also explained the essence of adapting to the platform

He also addressed several industry issues and spoke about the upcoming and exclusive virtual events he’s yet to bring on board to his fans and East African’s on the Ceek platform.

Famously known as Kondeboy, the multi-award winning superstar who has over half a billion views on YouTUBE and over 11 million followers across his social media platforms has been well embraced by Ceek.

At the press conference, Harmonize expressed that he is very excited about his partnership with Ceek because the Ceek Platform will allow him to put out more premium and exclusive content and also for the world to see East Africa’s Talent’.

Addressing the media, Mr Harold Ofori, one of the directors from Ceek stated that, talents such as Harmonize deserve massive financial and social support. Through their partnership with Ceek artists will be fairly compensated on their progress irrespective of their country of origin.

Additionally,  Mr Ofori stated that Ceek has integrated MTN, Momo Pay and is in the process of integrating Impesa and Tigo Pesa to make sure ”artists will be fairly compensated for every single thing that they put out there”

Many artists are very happy about this new partnership with Harmonize and are also excited to see what Ceek brings to East Africa.