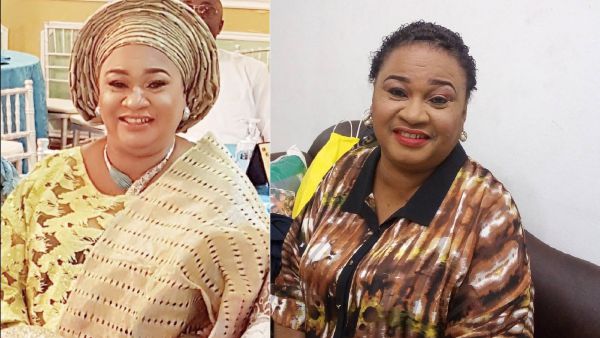 Nollywood Veteran Rachel Oniga has passed away at the age of 64.

In a statement released by the family, the veteran actress and producer died of  heart disease and not Covid- 19 complications as per the circulating rumours online.

This statement to set the records straight on Rachel Oniga’s actual cause of death. 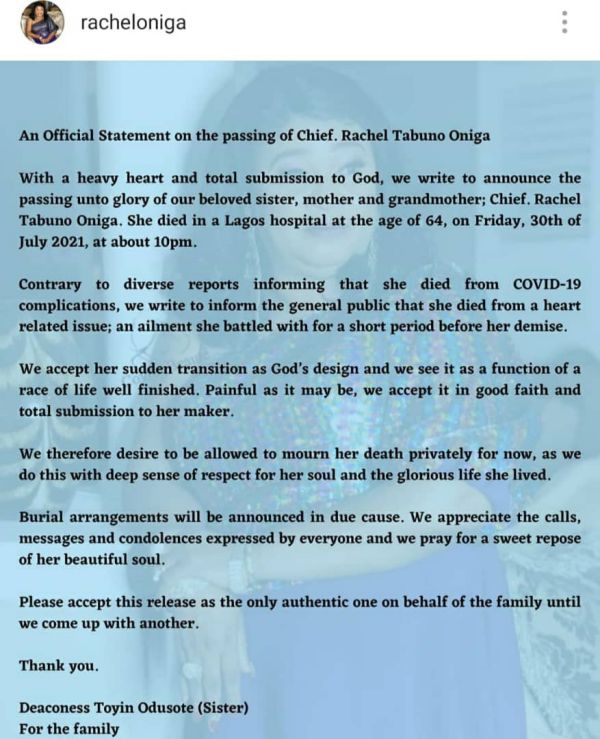 Arrangements pertaining her burial will be disclosed in due course, the family statement release said. However, in this period of anguish and mourning, the family humbly suggested the public gives them the due space they need. They also expressed their appreciation to the loved ones and fans pouring in their condolences through all social media channels, calls and texts messages.

Born on may 23, 1957 in Ebute-Metta, Lagos State in Nigeria, Rachel Oniga began her acting career in the year 1993. Reports indicate that the actress was a computer programmer, business woman, globetrotter and had divorced at the time she ventured into filmmaking.

She hails from Eku in the Delta State of Nigeria. Before her movie career, she worked at a Nigerian branch of European consultant firm known as Ascoline Nigeria Limited.

She rose to fame with her breakthrough Yuroba classic movie, “Owo Blow”. The main stars of the movie included Racheael Oniga among legends like, Sam Loco, Femi Adebayo, Bimbo Akintola and more. It remains one of the greatest of all time movies in Nigeria. It was well received in Nigeria and won several awards at the Nigerian Film Awards in the late 90s. Prior to her popularity, he starred in her debut movie, “Onome”.

Subsequently, she featured in movies and local series like the popular Nigerian drama series, Super Story, under renowned Nigerian production team, Wale Adenuga, Sango, Out of Bounds, Passion of Mind, Power of Sin, Restless Mind, all between late 1990s and early 2000s.

Her movie profession turned to its peak from 2013 shooting movies including Doctor Bello in 2013, 30 Days in Atlanta (2014), The Wedding Party in 2016, The Royal Hibiscus Hotel (2017), Power of 1 (2018) Omo Ghetto, Out of Bounds,Night Bus to Lagos, Passion of Mind, Power Of Sin, Restless Mind Doctor Bello,  My Village People and her current and last movie My Village People in 2021.

She doubled as a movie producer and has taken production credit in movies including, “True or False”.  She undertook her primary education in Lagos at Abule-Oja and continued with her secondary education in Edo state before taking a professional course in Computer Programming. She was honoured a lifetime achievement award from City People Movie Awards in 2017.

The late Racheal Oniga left behind three children and a grandchild.