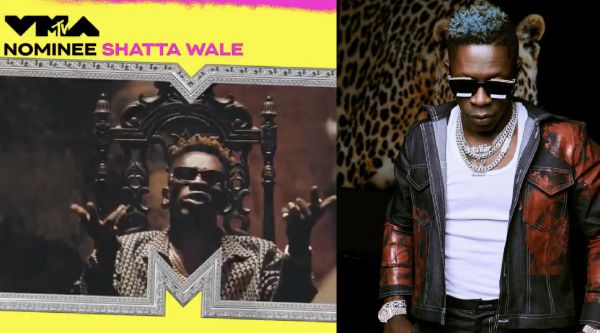 Shatta Wale Excited About His MTV Nomination.  Congratulations are in Order!

Multiple award-winning Ghanaian dancehall singer, shatter wale earns a slot in the 2021 MTV Awards  scheduled for Sunday, September 12, 2021.  MTV Awards seeks to celebrate entertainers and the work they invest in producing exquisite and top notch music videos, will celebrate multiple artistes in the world of music.

In more than ten awards categories, Shatta Wale makes his name in that of the “Beast Art Direction” nominations for his effortless contribution to Beyoncé’s song “Already”. The song which featured Shatta Wale and Major Lazer was an excerpt from Beyoncé’s The Lion King. .

Beyoncé song ‘Already’ featuring Shatta Wale and Major Lazer had been well-received by Africans both home and the fans of Shatta Wale. Beyoncé was praised for involving Africans in the huge project. The characters featured in the music already music video were African male and female models.

Shot in different locations in Africa, the Sensational Shatta Wale played important roles in the music video with electrifying moves and melodies that makes the visual stimulating. It made headlines in Ghana and Africa at large as well as giving the dancehall king the opportunity to gain more lovers from around the world.

“Already” video received positive reactions from music lovers globally and positive feedbacks from his industry colleagues including Sarkodie, Kofi Kinata, Stonebwoy among several others. It trended number one on YouTube and all other music video platforms. Currently “Already” music video has been viewed by over 50 million people and still counting.

The Ghanaian dancehall king is competing with the likes of Ed Sheeran, Lady Gaga, Lil Nas X, Saweetie and Taylor Swift for the Best Art Direction Award. This is a huge milestone and the whole of Africa is rooting for Shatta Wale to bring the Award home.

Check Out The Best Art Direction Nominees List And Details

Shatta Wale has been celebrated widely by his loyal hard core fans ‘The Shatta Movement’ for the historic achievement. A lot of congratulatory messages poured on the legendary musician’s social media handles including officials of Storm Energy drink which he serves as the company’s brand ambassador.

Shatta Wale goes by the real name, Charles Nii Armah Mensah jnr. He was formerly known by the stage name “Bandana” following his hit song, “Bandanna from Ghana” which received massive airplay in the county in 2004.

The Dancehall King, shot to fame and rose to the peak of his music career in 2013 after the release of his breakthrough song, “Dance Hall King” earning him huge fan base and the 2014 VGMA “Artist Of The Year” award. Since then he’s released a lot of songs with hits like “My Level,” “Wine Ya Waist”, “Dancehall Commando,” “Party All Night,” “Taking Over,” “Gringo” among several others.

For more about the upcoming MTV/VMA and how to vote visit www.mtv.com/vma/vote/