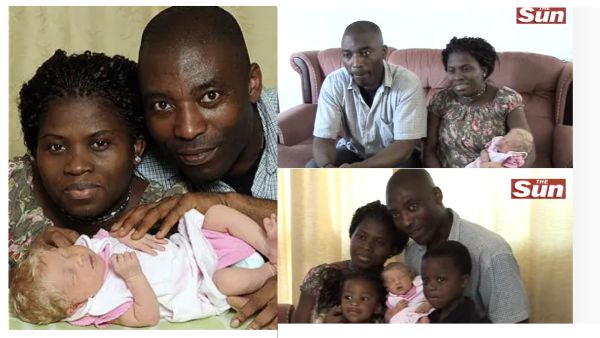 #TBT: Black parents give birth to white baby: Beauty of God (Nmachi) – The birth of a completely white baby girl, Nmachi, by a Nigerian couple has not stopped generating diverse reactions.

When Angela Ihegboro first saw her newborn daughter, she was “speechless.” “She’s a miracle baby,” the 35-year-old mother said. Baby Nmachi is a blue-eyed, blond-haired white baby born to two black Nigerian immigrant parents at a London hospital. Genetics experts don’t believe in miracles, but they didn’t have any simple answers to the mystery of baby Nmachi.

They offered three theories: She’s the result of a gene mutation unique to her. If that is the case, Nmachi would pass the gene to her children — and they, too, would likely be white. She’s the product of long-dormant white genes, passed on to her by her parents, that might have been carried by their predecessors for generations without surfacing until now. 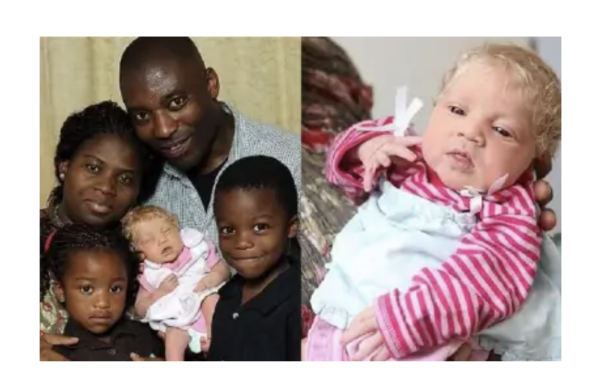 While doctors have said Nmachi is not an outright albino, or lacking in all pigment, they added that the child may have some kind of mutated version of the genetic condition — and that her skin could darken over time.

Speaking to The Sun, Ben Ihegboro Nmachi’s father said they were happy to have a new and anxiously waiting for the DNA results. He also said that even though the mum is fair in complexion, the baby looks very white and not an albino.

Angela also added her excitement and expressed how surprised she was when she first saw her daughter. Said some people from the hospital also asked her if Nmachi is an albino or her husband is white, to which she replied neither but believes might be due to ancestral genes.

Ben and Angela Ihegboro’s story might not come as a surprise to many Africans because, there has been similar stories where families have traced their roots and discovered that generations ago some of their ancestors or  had mixed raced kids as a result or marriage to a white person or might have been taken advantage of during the slave trade era.

The difference is the fact that Nmachi Ihegboro is white and not mixed.

The question people have been asking is where Is Nmachi Ihegboro?  How does she look like now, she must be about 11 years old now.

Do you know where Nmachi Ihegboro is now?  We would love to hear from them we can’t wait to see her current photos. We will keep updated.

What would you do if you find yourself in such a situation?