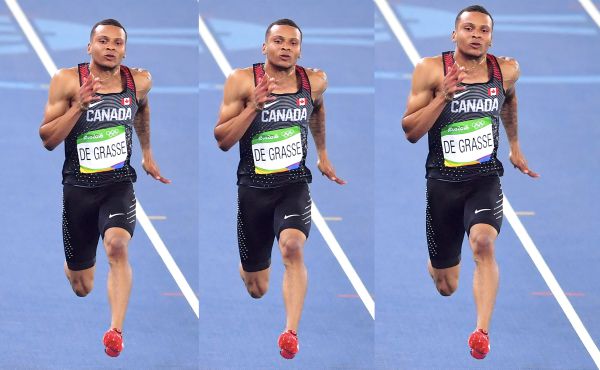 Andre De Grasse is the current Olympic 200m Champion. Congratulations are in order!

The man of the moment, Andre De Grasse grabs his first ever gold medal in the finals of the 200m race at the Tokyo Olympic games. The Canadian sprinter overtook world champions competitors like Kenny Bendnarek and Noah Lyles from the United States.

Andre De Grasse has won multiple bronze and silver medals. However, has never won the gold medal before. He made a landmark record in the history of 200 metres competition with a time of 19.62 seconds which is approximately 0.5 metres per second.

He has now been identified as the 8th fastest athlete in the entire history of 200 metres with his debut gold medal.

After his  historic global win, he addressed his family in joyous mood, promised them of a facetime call later and expressed his undying love for them. He also showed gratitude to God for the ground-breaking feat.

During  his secondary school days,  the Canadian born Sprinter  was a basketball player, however, he later switched to other athletics competition such as  100 and 200 metres race.

His remarkable positions for athletics at his early age gave him enough reasons to train specifically for sprinter and develop his athletics flairs. He then began training Olympian Tony Sharpe’s The Speed Academy. In 2013, Andre De Grasse won three gold medals in the Canadian sports event held in Quebec.

Andre De Grasse latter gained admission at the university of Southern California. There he joined the junior athletics games season in 2015. He topped several competitions for 100 and 200 metres. His international recognition came after his breakthrough win at the NCAA Championships.

As part of giving back to the community, he founded the ‘Andre De Grasse family foundation‘ in 2016 which he organizes the charity event, Andre De Grasse Holiday Classic Basketball Tournament annually to support his foundation. the foundation seeks to empower and inspire young adults through sporting activities.

Andre De Grasse is married to Nia Ali who is also an athlete. They couple are parents to two lovely kids.

Nia Ali is a hurdler who has has won multiple gold and silver medals. Prior to her professional success, she won a gold medal in 2011 at the World University Games held in Shenzhen, China

She is notable for winning the gold medal for the 2014 World Indoor Championships and defended her gold medal in 2016 for the same tournament.

Same year, at the latter part, she won the silver medal at the 2016 Olympics in Rio. The United States became the first country to win the available medals in the season of Olympics sweeping the gold, silver, and bronze in the women’s 100m race.

Nia Ali was also recognized as the first American woman to make such a successful sweep in 2016’s Olympic track and field event.