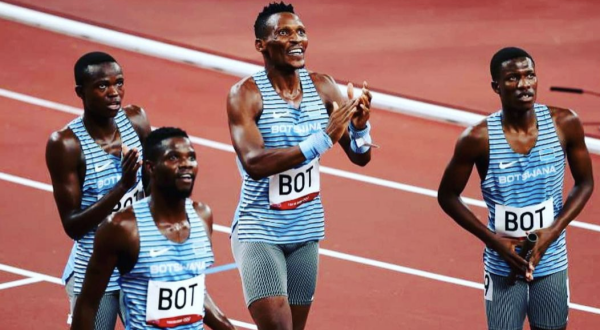 Exactly a week ago, was the climax of the internationally recognised athletics competitions, the Olympic games held in Tokyo, Japan, which saw many African representatives made their way through the impressive positions and bagging home medals in the various competitions.

Among the African teams include Kenya emerging as the African country that won most of the medals and the likes of Nigeria, Burkina Faso, Ghana, Uganda, Tunisia, and Botswana. The teams have been given sparkling supports from their nationals and government officials.

In the case of the Botswana sportsmen, the government and its officials have awarded the athletics in kind and in cash. According to news reports, the team were welcomed by their government officials including, the Minister of Youth Empowerment, Sports and Culture Development in the person of Hon. Tumiso Rakgare upon their arrival at the national airport.

They were highly cheered for the great achievement at the just-ended Olympics. Aside the praise, in a welcome address, the team of athletes who represented the country in the 4x400metres race and won medals have been promised by the government to build two bedroom houses for each of the team members.

Adding to the houses, the government has awarded each participant with 50,000 Botswana pula equivalent to £3.200 and $4,500. The offer is to motivate the team as well as those aspiring to join the national athletics team. Also, the team will be having a dinner with their officials on Wednesday.

This has raised missed reactions on social media and while others have applauded the government, others have also reacted negatively.

See some of the reactions below:

“Shout out to the Botswana government for gifting their Olympics relay Bronze medal winners with a house each”.

“That’s it? Representing the country, raised the flag. and that’s all the get? This is the problem with Africa. It’s either we barely or don’t support our own at all”.

The team represented by Bayapo Ndori, Isaac Makwala, Baboloki Thebe and Zibane won the bronze medal for the country which was the only medal won by the Botswanas at the Olympics. The rest of the team members including Leungo scotch and Anthony Pasela were also gifted with houses.

In the history of the country regarding Olympics, the country has recorded two medals with its first won by legendary middle distance athlete for the 800metres race, Nijel Carlos Amilfitano Amos. He won a silver medal in men’s 800metres finals at the 2012 summer Olympics held in London. Other international awards the country has won include the gold medal at the 2018 commonwealth games held in Queensland, Australia, and 2019 African games in Rabat, Morocco.

even though it might not be great in the eyes of the public but these athletes gave their maximum best and everything earned is deserving. Congratulations to the people of Botswana and the athletic team. Kudos to the government as well.