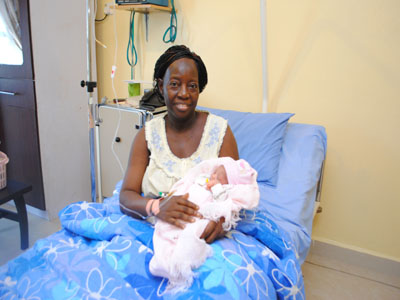 A woman said to be 60 has just been delivered of a baby at a Lagos hospital. For 31 years, Mrs Omolara Irurhe was globetrotting not for pleasure but in search of a child. She was a guest in the best hospitals.

But in 2010, her journey ended in the most unlikely hospital and country when she began an Invitro Fertilization (IVF) treatment at the St. Ives Hospital in Lagos. On Monday, what began as a seed hope four years ago culminated in the delievery of a bouncing baby girl.

Mrs. Irurhe becomes the oldest IVF mother in Africa. The global recognition for oldest IVF delivery goes to Rajo Deri Lohan, an Indian who in 2008 was delivered of a baby at 69 years.

The IVF Unit at St. Ives Hospital successfully aided the conception and delivery of the baby and has now equaled the United Kingdom’s record of IVF age delivery.

The team of doctors at the hospital was led by the Chief Medical Director, Dr. Tunde Okewale, who expressed joy at the successful delivery. Okewale said the physical condition of the mother – and not just the age – is a major factor that determines the success of conception and delivery through IVF.