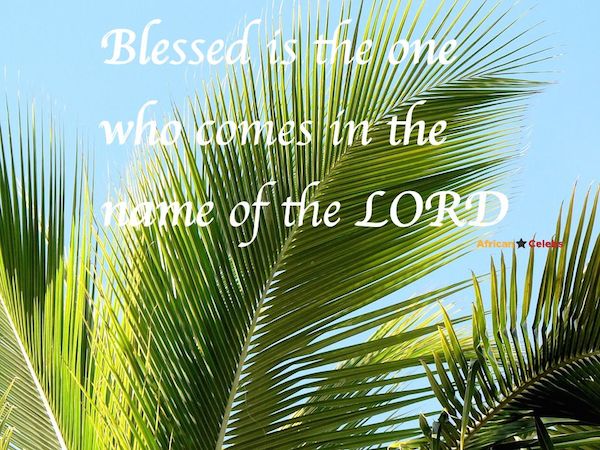 The story of Jesus Christ’s life on earth followed a sequence starting from his birth, his life mission, death and resurrection in the gospel according to Matthew, Mark, Luke and John.

Over 2000 years now, Christians across the world have been remembering Christ’s remarkable life throughout his journey on earth.

The most widely celebration by Christians all over the world includes, Christmas and Easter.

According to the Christian calendar, before the celebration of Easter, there are several feasts and events observed by Christians all over the world. Palm Sunday, is a festival celebrated by Christians to mark the triumphant entry of Jesus Christ into Jerusalem.

The festival often falls on different dates but always on a Sunday on Christians calendar.

It’s the Sunday before Easter and regarded as the day beginning the holy week and the end of lent season, where most Christian groups or churches go through spiritual exercises including fasting and prayers

On Palm Sunday, the story of Christ as indicated in or the Crucifixion process in order to fulfil a prophecy in Zachariah 9:9 and Isaiah 62:11.

The word of God reveals that, Jesus riding on a donkey to Jerusalem indicates his peaceful nature as a Man of Peace. In the olden days, kings only drove on donkeys when things were at peace but drove on horses when there’s war.

Hence, Christian denominations especially the orthodox churches remember this day in joy and possessions on the street or church premises with palm branches that have been blessed by the clergy.

In some churches, the palm fronds are kept and burnt into ashes on the Tuesday before Ash Wednesday the next year.

Scriptures in Luke 19:41-42, tells us that when Jesus saw the crowed praising him in Jerusalem, he wept because he knew they were the same people who will eventually betray him.

Basically, the commemoration of Palm Sunday reminds Christians about the supremacy of Christ as a king and having the whole world in his hands.

It also reminds us to keep worshiping the most-high for the sacrifice that was made, resulting in the celebration of the resurrection power of Christ.

“Blessed is he who comes in the name of the Lord!” “Hosanna in the highest heaven!” Matthew 21:9

Let’s look at some scriptures for Palm Sunday.

“Lord, save us! Lord, grant us success! Blessed is he who comes in the name of the Lord. From the house of the Lord we bless you.”

“Rejoice greatly, O daughter of Zion! Shout aloud, O daughter of Jerusalem! Behold, your king is coming to you; righteous and having salvation is he, humble and mounted on a donkey, on a colt, the foal of a donkey.”

Now as He drew near, He saw the city and wept over it,  saying, “If you had known, even you, especially in this your day, the things that make for your peace! But now they are hidden from your eyes