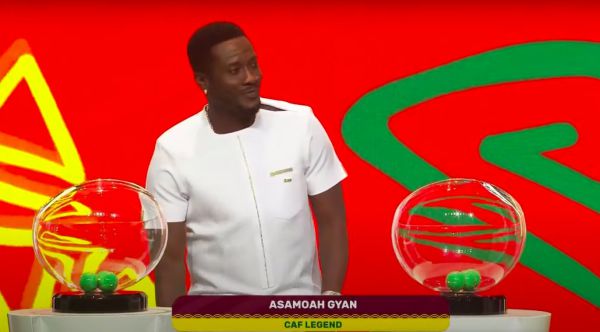 Congratulations Are In Order!

Held in the capital of Cameroon, Yaoundé on Tuesday night August 17, 2021, the programme produced a list of power-packed and legendary African national soccer players of which Ghana’s favourite Asamaoh Gyan, popularly known as “Baby Jet” was not left out.

The former Ghana Black Stars’ captain was named amongst  veteran colleagues such as Cameroon’s legendary Samuel Eto’o Fils and women’s soccer icon, Gaëlle Deborah Enganamouit and most celebrated Ivory Coast player, Didier Drogba. All the superstars were selected by the officials of CAF and organizers from the host country to assist them and the teams’ delegates in the final draw.

Assamoah Gyan took to his official social media handles to express his appreciation to CAF for the honour. also, he highlighted few supported and friends with their handles under his appreciation post. He was massively praised and commended by his followers and fans online for his admirable recognition.

As jovial and lively as he is, the well-decorated soccer player was captured in a video which he happily made a humorous statement regarding his goal scoring and dance moves that Ghanaians love to see and dance along. Despite putting on the African print, it has always been his desire to be the Ghanaian jersey and score and dance for Ghanaians to be happy because it also helps the players to be elated. Adding that he feels so delighted to be present at the AFCON Total Energies 2021 draw 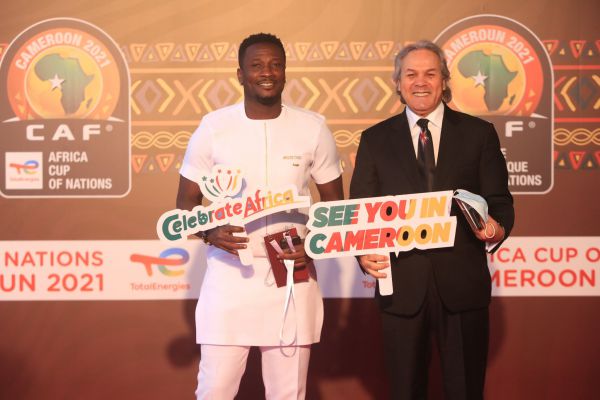 Asamoah Gyan remains one of the key players in the Ghanaian national team notable for scoring over 51 goals for the country with his 109 appearance. He joined the national team and made his debut professional appearance in 2003 when he scored his maiden goal for Ghana at the FIFA World Cup qualifying series. Well-known for his striking position number 3, the leading goal scorer represented Ghana both in World Cup and African Cup tournaments.

He holds the record for the most African goal scorer in the history of world cup scoring over 6 goals in his appearance from 2006, 2010 and 2014 World Cup tournaments. He’s recognised for his landmark first ever and fastest goal scored in the 2006 FIFA world cup during the match between Ghana and the Czech Republic earning the black stars a 2:0 victory against their opponent. The same goal was Ghana’s debut goal in the history of world cup.

"Every African is ready for this event!" 🏆@ASAMOAH_GYAN3 thoughts regarding the next edition of the #TotalEnergiesAFCON in Cameroon. pic.twitter.com/jcbMu7YOsD

He led the national team to its maiden quarter finals in the 2010 World Cup with his last minute’s goal during the extra time of play and won over the Americans. He contributed to Ghana’s position of 2nd runner up in the 2008 AFCON held in Ghana which was his debut AFCON appearance. Subsequently, he scored goals that gave Ghana recognition on the map of the football game.

Ghanaians love watching Asamoah Gyan for his zeal and love for the country, the dribbles on the field of play and the joy he brings to the heart of Ghanaians in the seasons of international football games.

The 2021 African cup of nations tournament is kicking off in Cameroon from January, 09 to February, 06 2022. Ghana will be playing against  Morocco, Comoros and Gabon in their group (c.)

CAF Legend Asamoah Gyan has encouraged the Black Stars to focus on winning the group stages and aim at wining the trophy. Hopefully, the Ghanaian national team will come out successfully.

Congratulations to Asamoah Gyan for his CAF recognition.