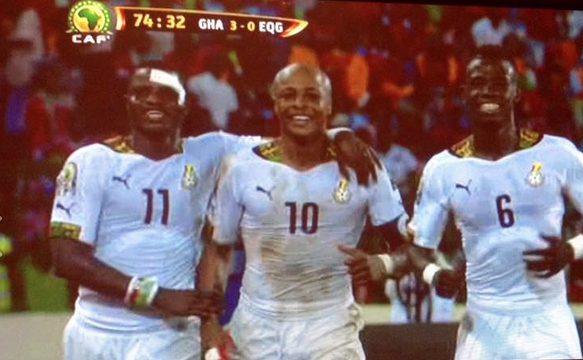 Joyonline has reported that, President John Mahama has announced a $25,000 reward to each of the gallant Black Stars players who won silver at the just ended AFCON 2015 tournament held in Equatorial Guinea.

The Stars were beaten 9-8 on penalties by the Elephants of Cote d’Ivoire after a barren yet grueling 120 minutes of football action.

They arrived in Ghana on Monday to a rapturous welcome by Black Stars supporters. They were met on arrival by the Vice President Papa Kwesi Amissah-Arthur who was full of praise for the exploits of the Stars.

On Tuesday, it was the turn of the president to show his gratitude to the boys who made Ghana proud at the just ended tournament.

Announcing the $25,000 reward, the president said the gratitude of the nation is the most handsome reward the players could get.

“We have a reward for you. GNPC  is your headline sponsor and GNPC has made a promise to reward you when you come back.

“So GNPC has asked me to announce that they will give a reward of $25,000 to each of you as a reward for the great work that you have done.

“There are other sponsors who have come forward. We are finalizing the rewards but they look quite promising and handsome to me,” he said, adding the team captain will later be informed about the package.

Ghana made a fifth successive semi-final berth at the AFCON tournament and were silver medalist on two occasions after losing to Egypt in 2010 and then to Ivory Coast in 2015.