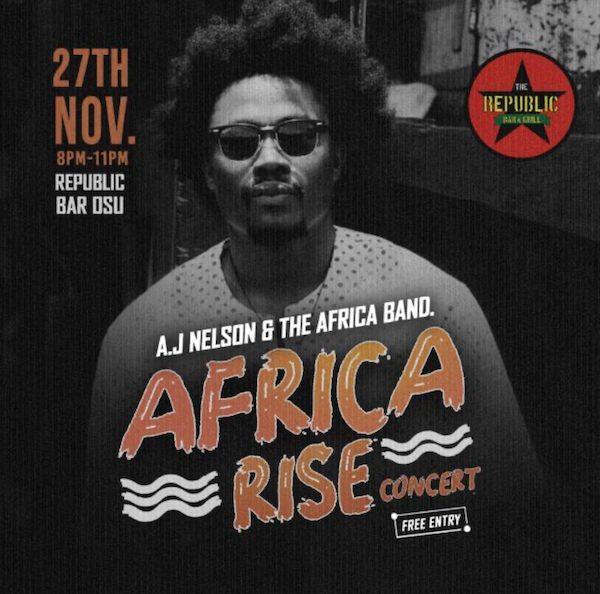 “The agenda of awaking Africa up has never stopped and has thus, become a mantra.

This is why the need for another ‘Africa Rise Concert’ has become imperative because the musical revolution is eternal.”

of his Africa Rise Concert the first of which was held this past April at the Zen Garden inside Labone at Accra in Ghana.

He explained: “I was very moved by the support from fans and fellow artists during the first one and the energy was so on point my team and I felt it was important to do a sequel.”

The son of Africa, AJ Nelson, has been preaching the need for a positive awakening for Africa through her youth’s seizing the moment this century offers to uplift the continent.

“Anytime I grab the mic and drop beats I feel a strong responsibility to enlightenment my listener and the earth through my lyrics.

We can not continue to play the victim and wallow in the past, we must take the bull by the horns — our children look up to us.”

The concert this time will be happening at the Republic Bar & Grill inside Osu with AJ Nelson’s The Africa Band on November 27, 2019.

It will be the artist’s last show of 2019 as he rounds up the year in preparation for an equally exciting 2020.

on the Beach earlier in September and Osagyefo Night which celebrates Ghana’s first Present Kwame Nkrumah’s contributions to music and the creative arts in Ghana.

Entry to the Africa Rise concert at the Republic Bar is free. Come and get enlightened about the truth of the continent and jam to great music from the AJ Nelson and The Africa Band.

Explore the Afrocentric energy of AJ Nelson on social media where you can find him on Twitter as @AJNelsonMusik.